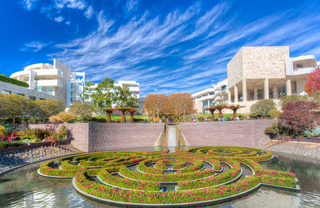 What’s one of the greatest perks of having a Northridge apt to call home? For some, the superb location is more than enough. It’s central to all manner of great schools, shopping, restaurants, and transportation options — making it one of the most livable communities on the North side of Los Angeles. For others, though, it’s the access that location grants to some of the city’s most revered institutions that makes residing at places like Alder well worth it.

You probably can’t find a clearer example of that than the famed Getty Center. This haven of art, architecture, and all things cultural has been a world-renowned institution since its opening in 1997. It draws in more than a million visitors every year, and for good reason. This massive museum is the stuff of legends — a model for most others to follow.

What makes it so profound? Today, we’re going to take a look at this notable landmark to answer exactly that. Read on, as we delve into the history and mystique behind the internationally-famous Getty Center.

Just What Is the Getty Center?

One could easily sum up the Getty Center as “just a museum.” While in some respects true, this answer doesn’t really get to the heart of the Getty’s history and significance. Specifically, the museum’s mission is one that you could easily overlooked if you decided to view it as merely a place to go and look at pretty art and artifacts for an afternoon:

“The J. Paul Getty Museum seeks to inspire curiosity about, and enjoyment and understanding of, the visual arts by collecting, conserving, exhibiting and interpreting works of art of outstanding quality and historical importance.”

It’s about more than housing great works of art. The Getty Museum exists to help develop and enhance the public’s knowledge of humanity’s rich history of visual expression, and seeks to enshrine the contributions of our most skilled artistic practitioners.

It all started in J. Paul Getty’s home in the Pacific Palisades back in 1954. Getty turned his domicile into a collection of fine arts, later expanding it with a “museum wing” in 1974. After Getty’s death in 1976, even this proved too small for the works the Getty Trust was amassing, which led to the search for a suitable secondary location.

Many years and several hundreds of millions of dollars later, that second site, which we now know as the Getty Center, debuted. It was designed by Richard Meier. It took more than eight years to complete. Upon completion, though, it now stands as a tribute to fine architecture and the site of much of the Getty Museum’s work:

“The collection of the J. Paul Getty Museum comprises Greek, Roman, and Etruscan art from the Neolithic to Late Antiquity”

This includes European art like illuminated manuscripts, paintings, drawings, and sculptures, many of which date back as far as the middle ages and continue up until the present day. You can see some of these amazing pieces at the Getty Center’s current exhibitions.

There is, for an example, an entire feature on pastel works, titled “Pastels in Pieces.” Running through the 29th of July, it takes a look at how 18th Century pastel artists worked within the constraints of their time period to create some of the most impressive portraits of the era. Meanwhile, “Icons of Style” takes on an entirely different time period and style of art. Flashing forward to the 20th Century, the exhibit seeks to answer an age-old question: “Why do some fashion photographs transcend their commercial character to function as works of art, while others do not?”

The Getty’s focuses are diverse, and their resources vast. Not including the art, the land and property for the Getty Center alone is estimated to be worth more than $3 billion. As of 2013, the Getty Trust endowment totaled more than $6 billion. They certainly have the funds to aid in their mission, which includes the educational programming they offer for the public. There’s a wide range of lectures, courses, performances, and expert talks you can take advantage which occur daily. You can learn more about what’s coming up next on the Getty Museum’s public programs page.

Cool Activities and Events at the Getty Center

One notable event coming up on the Getty Calendar are the ever-popular Friday Flights:

“Since 2014, the Getty Center’s Friday Flights has been a summer performance series that turns the institution’s rambling hilltop campus into a stage for a diverse selection of music, dance, art, and theatrical happenings.”

The artists on display vary, though every Friday Flight features an original musical/sound composition, PASSING INTO | PASSING OUT, on the Getty tram. You can learn more by taking a look at Tom Krell of How to Dress Well.

The next entry into this series features a performances and presentations from Geneva Jacuzzi, Jibz Cameron, Corey Fogel, Elliot Reed, Ceci Moss, Barbara T. Smith, and Andrea Bowers. You can learn more about them all from the events page, and reserve a spot at the festivities as well. While admission is free, some parts of the programming require advanced registration for you to attend.

What’s New at the Getty Center?

Like most Museums, the Getty Center is always pouncing on opportunities to bolster their collection. They recently did exactly that, acquiring a “rare Jewish illuminated manuscript from 1296, known as the Rothschild Pentateuch.” As quoted in the New York Times, “this is the most spectacular medieval Hebrew manuscript that’s come to market in over a century,” and while the Getty is disclosing how much they purchased the manuscript for, what is clear is that this will make an excellent addition to their already outstanding collection.

The Northridge Apts Put You Close to Even More

In addition to great museums, being a member of fine communities like Alder puts you within arms reach of plenty of outdoor parks, colorful local diversions, and historic city landmarks. Be sure to check out everything this modern apartment complex has to offer and remember the name as you continue to research for your next move.