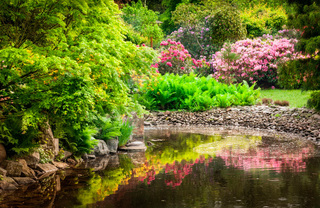 This time of year, the weather is gorgeous out around the apartments in Reseda, CA. There’s no excuse not to get outside and have a great time under the beautiful sun. There are plenty of “typical” options to settle on — a stroll down the block, a walk in the park — but for something a bit more out of the ordinary, why not a day trip to the Japanese Garden in Van Nuys?

Suiho En, as it’s called, is the “Garden of Water & Fragrance.” With a name like that, it’s hard not to imagine a natural wonder of superlative elegance, but the Japanese Garden goes far beyond even that. Join us, as we take you on a quick trip through the history and and amazing sights you’ll see on your visit.

A Japanese Garden? In Van Nuys?

Yes. The idea was born of the mind of Donald Tillman, in order to “demonstrate a positive use of reclaimed water in what is generally agreed to be a delicate environment.” The Japanese Garden presented itself as the ideal “delicate environment,” and, to ensure authenticity, were designed by professor, architect, and notable garden designer Koichi Kawana:

“The basic style of the garden is known as Chisen-Kaiyushiki, or wet garden with promenade, and is fashioned after those strolling gardens which were built during the 18th and 19th centuries for Japanese feudal lords on their vast estates.”

This style, Suiho En’s caretakers note, is well-known for its immensity, providing an open, bright, and joyful feeling. Upon entering the Japanese Garden, you’ll be presented with the relaxing Zen meditation garden, known as a Karesansu, along with a large, grass-covered mound (representative of Tortoise Island).

A minor detail at first glance, the knowledgeable might recognize this as a symbol of longevity. In fact, symbolism abounds throughout Suiho En, seen even among the lanterns and trees that dot various areas of the garden.

Take the Nure Sagi (Wet Heron Lantern), for instance. The tall, bell-shaped, six-sided lantern is more than mere decoration. The carving of either a heron or crane is also a symbol for a long life. Then there’s the Kasuga Lantern. Emblazoned with the image of a deer, it’s seen as a “divine messenger,” one bringing with it peace and good fortune.

Among the trees in Suiho En, you’ll find Black Pine, Ginkgo, Willows, Weeping Peach, and, of course, the exemplar of the “Japanese Soul,” the most noble Cherry Blossom. Held above all others for its dignity and grace, the Cherry Blossom was a valued most of all by courageous men who did not fear death in battle.

It’s features like these that attract visitors from all around to Suiho En, and you’ll likely have a magnificent time touring the garden and taking in the sights for yourself.

Most that visit the garden will instantly comment on its beauty, with many noting that not even the sight of the administrative building in the background can count against the sense of wonder they feel upon entering Suiho En. In fact, some even find it a welcome addition to the garden aesthetic:

“The Tillman Water Reclamation Plant is also on site. This building has won many awards and is very lovely to photograph!”

The combination of terrific scenery, calming atmosphere, and affordable entry prices have made this neighborhood landmark a favorite among many a resident of the valley.

Suiho En occupies a 6.5-acre space near the Tillman Water Reclamation Plant and Woodley Park, in the community of Lake Balboa, adjacent to Van Nuys and Encino.

The garden is open Mondays to Thursdays from 11:00AM to 4:00PM, and Sunday from 10:00AM to 4:00PM. They’re closed Fridays, Saturdays, and on all city of Los Angeles Holidays (and within 24 hours of rain). They might also close for brief periods when peak capacity is reached.

Gaining admittance to the garden is quite affordable, with tickets priced at $5.00 for adults and $3.00 for seniors/children under 12. For special events, admission is usually a bit higher, and for large groups (15 or more) advanced registration is required.

Registration is also required for their docent walking tours:

“The Garden offers Docent led tours Mon-Thurs starting at 9:30AM. by appointment only. The last tour will start at 10:30AM and lasts about an hour and fifteen minutes.”

When visiting the garden, it’s advised that you follow their rules and etiquette, particularly their stringent policy on taking photographs. If you’re taking photos to commemorate your visit, you’re in the clear; if you’re coming for the purpose of “filming for any reason or taking special event, pose and/or professional photographs,” you’ll need to obtain a permit in advance.

It might also be wise for you to bear some of the other policies in mind: don’t feed the fish (or birds), don’t bring any animals in (with the exception of registered service animals), don’t run, don’t pick any flowers or leaves, and don’t litter.

You can rent the garden for special events, such as weddings. There’s a fee attached ($1,200 for the first three hours, and $150 for every hour afterwards), a reasonable expense for the prospect of holding nuptials in such a pristine environment.

You can even rent the garden for movies, commercials, and other film/photography projects. Fun fact: a few episodes of Star Trek: The Next Generation used Suiho En as a backdrop, with the Tillman Water Reclamation Plan administrative building serving as “Starfleet Academy” during shots set on Earth.

It’s the Perfect Time of Year to Take a Quick Jaunt From the Apartments in Reseda, CA

When that fun-filled day trip is over, though, you won’t be disappointed in the slightest, provided you’re a member of beautiful communities like Alder.

As splendid as any Japanese Garden you might encounter in your travels, this fine building presents its residents with a “new way to live,” complete with some of the most spacious floorplans and marvelous creature comforts you’ve seen in an apartment space.

There’s certainly room for you here, so be sure to check out everything that Alder has to offer today.