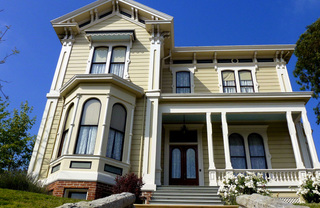 To say that Los Angeles is a city replete with legendary locations might actually be something of an understatement. You’ll find historic bits of architecture everywhere you go in this town, even around the vicinity of the distinctly modern Alder luxury apartment homes, as a trip to notable buildings like the Foy House will make clear:

“Dating from 1872, this house is the oldest in Angelino Heights – although not original to the site. It has been moved twice: in 1920, from its original downtown location at the corner of 7th Street and Figueroa, and again in 1992 from Witmer Street, across from Good Samaritan Hospital.”

Ready to hear the story of a remarkable LA home that has moved not once, but twice during its time in existence? Read on, as we tell you about the history behind this interesting landmark, its notable inhabitants, its status as a Los Angeles Historic-Cultural Monument, and the lovely neighborhood where it resides in the present day.

The Story of Foy House

Foy House was designed by one of the first practicing architects in Los Angeles, and one of the most notable in the city’s history — Ezra Kysor, who was also responsible for the design behind another LA landmark, St. Vibiana’s Cathedral. It’s representative of the post-Civil War Italiante style, mimicking the appearance of a large Italian Villa, emphasizing verticality and complete with “with flat or low-pitched roofs, slant-sided bay windows, and heavily bracketed cornices.”

By all accounts, Kysor created the home for the family of a prominent LA businessman (and, for a time, the Chief of Police), Samuel Foy in 1872. The original site for the building was in the original Pueblo de Los Angeles, at what would now be considered the corner of 7th and Figueroa Streets downtown, and, at the time, it was the only three-story structure in the bounds of the city.

Foy and his wife, Lucinda, raised their family — one son and four daughters — at the home. Perhaps the most prominent of the progeny, however, was their daughter, Mary Foy, who would become the first female librarian in Los Angeles in 1880, an achievement that would cement her legacy in the California Library Hall of Fame:

“Mary Foy, then 18 and a recent graduate of Los Angeles High School, applied for the job of chief librarian after her predecessor was dismissed from the position. Foy became LAPL’s first female chief librarian.”

During her time at the library, which lasted until 1884, Mary Foy helped bring about several improvements through her varied duties, which, by her own accounts, included “setting up a catalog system, keeping the library accounts, acting as hostess in the Ladies Reading Room, serving as referee for on-going chess games in the Newspaper Room, and settling bets made in the downstairs saloon.”

After her tenure at the library Mary Foy became an educator, and a leader in the women’s suffrage movement, as well as a founder of the patriotic organization, the Native Daughters of the Golden West.

As for the Foy House, Samuel Foy lived there until his death in 1901, and his wife remained there until selling the property in 1919. It was then, when the new owner decided to build a six-story structure on the land, that the Foy House was moved to South Witmer Street, across from the Good Samaritan Hospital, where it sat until the early 1990s.

During its time on Witmer Street, the Foy House was the headquarters of Magma Power Company, and became the 8th property to be designated a Los Angeles Historic Cultural Monument. Magma Power took on the expense of restoring the house, but eventually, they too abandoned it and it was donated to the Good Samaritan Hospital.

Again in the 1990s, the home would be moved. This time, after the house had fallen into disrepair, Good Samaritan Hospital struck a deal with an owner of a home in Angelino Heights. They moved Foy House to Carroll Avenue, where it was restored, and later went on to be used as a location in a few movies and TV Shows, like Charmed and Guilt Trip.

The Foy House remains on Carroll Avenue to this day, where the current owner has “faithfully reconstructed elements lost during the multiple moves, such as the exterior window canopy.” The interior of the home is as impressive as it was during its infancy, with towering, thirteen-foot ceilings on the first floor, large windows to let in plenty of natural light, and many of those original touches that are emblematic of its design style, like carved wood trims, pass-through windows from the kitchen to the hallway, and even a butler’s pantry.

In the neighborhood around Foy House’s current location, you’ll also find all manner of LA landmarks. Echo Park, the beautiful lakeside expanse, sits just moments to the west, and to the east, you’ll see Dodger Stadium and LA’s bustling Chinatown. Just to the south is Vista Hermosa Natural Park, and venturing further, you’ll enter Downtown LA, and the many shops, restaurants, and venues that dot it.

Foy House has been on quite the journey, a unique one for a home in the LA area, but the trip, it seems, has been well worth it, and this little slice of city history is still going strong!

Getting There From the Alder Luxury Apartment Homes

From Alder, this landmark is about a 15 mile drive to the southeast, one that will take you through Universal City, past Griffith Park, and through a few historic LA neighborhoods before reaching your destination. While you’re there, be sure to have a blast exploring the wonders of Angelino Heights and the surrounding area, then prepare to return home to your own lovely neighborhood of Northridge. There’s plenty more to see and explore here, and a vibrant community to interact with as you do it. All part of the reason this is one of LA’s most desirable places to live, and all the more reason you’ll want to call Alder home, if you don’t already!