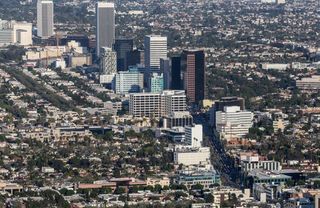 Near the apartments in Reseda, CA, centered around a legendary stretch of world-famous Wilshire Boulevard lies Miracle Mile. This bustling district is jam-packed with some of the finest retail, entertainment, and museum venues in the city, and is accompanied by a long and storied history to boot. It’s also a place you, as a resident of sunny, Southern California, might want to check out in the near future if you’re looking for a good time, so today, we’ll be taking a look at how Miracle Mile has evolved over the years, and what some of the main attractions that await you are in the present day.

How Miracle Mile Came to Be

Long ago, before California was part of the United States, the area now known as Miracle Mile was private land that changed hand several times. In 1829, when it was still “Rancho La Brea,” it was gifted to Jose Antonio Rocha. Rocha sold it to Major Henry Hancock in 1865, and it wasn’t until 1881 that the first subdivision was created in the area. Even in the late 1800s (and into the 1900s), the land was still undeveloped, but that all changed when real estate maven AW Ross took control of the land:

“The Miracle Mile was the brainchild of real estate developer A.W. Ross, who in 1921 paid $54,000 for 18 acres of land along the south side of Wilshire Boulevard between La Brea and Fairfax avenues.”

It was slow going at first. Though Ross had dreams of building a glamorous retail district in the location, but few too interest in his vision, and the developer had trouble convincing even his influential friends of the promise the land held. Still, Ross pressed on, and through his perseverance (and the rise of the automobile), prospects in Miracle Mile turned around for the better. By 1928, it started to flourish as a glamorous and desirable sector of the city, but still hadn’t received its famous name. At this point in history, it was still known as “Wilshire Boulevard Center,” and, as the story goes, one of Ross’ friends gave him the idea for a much better title for his dream:

“Ross was describing his vision for the development when a friend interjected: ‘From the way you talk, A.W., one would think this is really a miracle mile.’ The name, with its obvious promotional value, stuck.”

After that, Miracle Mile continued its ascent to greatness, acquiring new buildings and businesses, like the Desmond’s that came to Wilshire Tower, a Silverwood’s, and even a Coulter’s, which moved from their downtown location to the greener pastures of Miracle Mile. Today, Miracle Mile retains its reputation as a magical LA neighborhood, a museum-packed retail and business district with an unmistakable Art Deco charm that visitors from far and wide come to enjoy.

Today, the Mid-Wilshire/Miracle Mile area is flourishing. The population, based on LA Department of City Planning estimates in 2008, was 47,176, with a density of 14,988 people per square mile. With a total area of about 3 square miles, this makes it one of the most densely populated portions of Los Angeles, and among the most densely populated areas in the entire country to boot.

In terms of ethnicities, this is one of the most diverse areas across LA, with a mixture of peoples from White, Black, Asian, and Latino heritages:

Beyond that, the residents of Miracle Mile are fairly well educated and in the middle-class in terms of their income. Roughly 45 percent of residents 25 and older possess a four-year college degree, and the median household income is $58,483. Beyond that, the percentage of households earning between $40,000 and $60,000 annually is on the high end for LA, contributing to the Miracle Mile’s well-off status.

And, as you’ll soon see, Miracle Mile is dense with locations for you to explore, from museums to restaurants and beyond. Let’s next dip our toes into some of the offerings this neighborhood brings to the table.

Of the many wonders of Miracle Mile, Museum Row, a section housing many popular institutions, is perhaps the most famed. Here, you’ll find a wide range of educational buildings, though five rank as the most popular:

Beyond the museums, you’ll also find the legendary El Rey Theatre in Miracle Mile, an masterfully-constructed Art Deco building built in 1936 that seats some 800 people and has hosted a number of local and touring acts. Though it was once a single-screen movie theatre, you’ll now see a cavalcade of popular musical acts roll through the premises, such as Black Label Society, Young MA, and even a few acts you haven’t heard of (but will certainly want to add to your playlist once you do).

As for those restaurants, bars, and coffee houses, you’ll find a great many, but a shortlist of favorites would have to include:

And don’t forget all the shopping you can do in Miracle Mile. Whether it’s flowers, antiques, clothing, beauty supplies, or something else that tickles your fancy, chances are you can find what you’re looking for here, with a wealth of choice that will likely blow your socks off!

Part of the Neighborhood Near the Apartments in Reseda, CA

Interesting sections of the city are all around you at apartments like Alder. Here, in the heart of Northridge, legendary sections of Los Angeles, like Reseda, Van Nuys, and North Hollywood are all well within reach to the south, while natural wonders like Angeles National Forest and Castaic Lake lie just to the north. There’s a whole city to explore, and Alder is just the place to call “home” while you do it. Make this your new spot; check out what the community has to offer, and experience Los Angeles the way it was meant to be.