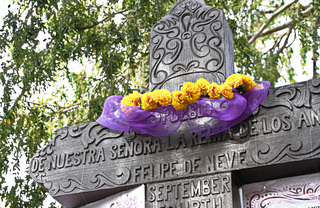 Despite being a vibrant metropolis, Los Angeles retains its rich history through dozens of historic buildings. Near the Conga Park apartments, you can find the El Pueblo de Los Angeles Historical Monument. This building stands as a testament to pre-America California, allowing those who visit to step back in time. If you’re planning a visit, here’s what you need to know.

The El Pueblo de Los Angeles Historical Monument finds its roots in the founding of the pueblo. Back in 1781, King Carlos III of Spain ordered the colonization of more land in what is now Los Angeles. He gave the task to then Governor Felipe de Neve, who directed eleven families to create a pueblo in the area.

Forty-four individuals, including children, left their homes in the Gulf of California and traveled to the Los Angeles River. They constructed the pueblo southeast of today’s current LA plaza. There, they began turning this small village into a town.

From Pueblo to City

The pueblo grew slow at first, gaining an average of 25 people per year. A flood in 1815 washed the town away, but the people were determined to rebuild their homes and did so further away from the river. The new town was dubbed El Pueblo de Los Angeles, better known as L.A.’s nickname “The City of Angels.”

In 1850, the population had grown from the original 44 inhabitants to 1,615 residents. A commercial center, social center, and the Plaza Historic District were all constructed in this 70-year span. The year 1850 also saw California become a part of the United States.

That change also meant the now bustling locale was incorporated as a city. With its new title, Los Angeles experienced a population boom that helped it grow from 11,200 residents in 1880 to 50,400 in 1890. Ten years later, the population more than doubled to 102,500 residents.

Los Angeles’ commercial and cultural center grew as well, slowly moving further away from the Plaza Historic District along with improvements to the city. The change was so drastic that the Los Angeles time even wrote about it in 1891, noting that property holders on the north side were concerned with how the city would change. Regardless, change and growth marched forward.

Over 100 years later, Los Angeles remains the vibrant hub you know it as today. Towns and communities sprung up over the century, creating today’s beautiful locales like Northridge, Pasadena, and Long Beach.

Without that original pueblo, Los Angeles might look a lot different or not even exist. So, the city turned the Plaza and its surrounding 44 acres into a historic park in 1953. You can stop in the visitors center in the Sepulveda House to take a tour of the district with the Las Angelitas del Pueblo volunteers.

Inside the district you’ll find some of the oldest structures in the area. The Nuestra Senora La Reina de Los Angeles Church (1822), Pico House (1870), and historic Avila Adobe residence (1818) are a few of the more prominent within the Plaza. Several buildings have been restored to their original beauty and now operate as museums.

Numerous archeological digs take place here, as well. Household goods, tools, and ceramics unearthed tell the tales of indigenous tribes that lived in the Los Angeles area long before Europeans ever set foot on the soil.

Combined with the historic value of the buildings in the Plaza, the archeological findings led this district to its designation in the National Register of Historic Places in 1972. While that honor did not prevent the demolition of dozens of old buildings, there are still a handful left standing that remain open to the public. These include:

If you plan on making a trip to this historic area from your home in Northridge, it helps to set an entire day aside. The trip is a short one, but there’s so much to see and do that you’ll need plenty of time if you want to visit all the historic sites in all their glory.

Once you arrive, you can choose between a tour from the Las Angelitas or to visit these sites yourself. If you choose to skip the guided tour, make sure to bring a map and have a plan. Starting from one site and traveling in a circle (as close as you can to one) is a great way to see everything in a day.

Far from the original pueblo, Alder embodies the radiant life in a collection of brand new apartment homes adorned with modern interiors, designer-selected finishes, and signature style. Add in an incredible list of amenities and a central Northridge location, and you’ve got the perfect place to all home.

Quartz kitchen countertops are accentuated my modern cabinetry, fixtures, and lighting. Wood-style plank flooring leads to balconies with breathtaking views of the area, while smart building technology enhances your life. Walk-in closets, oversized soaking tubs, and stacked full-sized washers and dryers all combine in spacious floor plans to elevate your sense of living.

Step outside your front door to find a state-of-the-art fitness center, yoga studio, and resident library lounge. Tackle the day’s obligations in the business center, then let loose by the resort-style pool terrace complete with cabanas and fire pits. Mingle with residents in the club lounge with entertaining kitchen or treat your pet to the dog wash and grooming salon. Everything you need is right here.

Come and see what vibrant, beautiful living looks like. Welcome to the radiant life. Welcome to Alder, a new way to live.