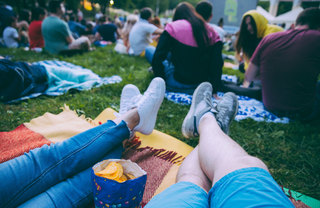 For those who have been in the apartments in Reseda CA for a good amount of time, you’ve probably heard of Cinespia Cemetery Films by now, right? They’ve been around since 2002, and the idea is a simple one — Angelenos gather (typically at the Hollywood Forever Cemetery), then watch one of the fine films Cinespia picks out and enjoy the evening:

“Since 2002, Cinespia’s Hollywood Forever Cemetery outdoor movies have offered audiences one of the most magical nightlife entertainment experiences in greater Los Angeles. In addition to showcasing the best of cinema, Cinespia cemetery screenings feature pre-show DJs, themed photo booths, a picnic at a gorgeous Hollywood landmark, and even occasional visits by stars, directors and filmmakers.”

As you might imagine, they’ve got plenty coming up on the late summer calendar, and if you’re a fan of fun, you’ll definitely want to get in on some of these upcoming events. Here’s a breakdown on some of Cinespia’s near-future screenings at the Hollywood Forever Cemetery.

As the name suggests, this event on August 17th will evoke the old school feeling of a classic 90s slumber party, and will have the on-screen entertainment to match. You’ll get to see all those actors you were head-over-heels for back in your teenage years in their prime and in some of your favorite teen flicks. The slumber party will start with a screening of “Never Been Kissed,” will be showing “I Know What You Did Last Summer” at midnight, then finishing up with the cult classic “Jawbreaker.”

Anyone who’s into quality filmmaking knows about the forever classic, Psycho, directed by Alfred Hitchcock. This event, taking place on the 24th of August, will give you chance to visit the Bates Motel (at least on the screen) and check the perfect technique of this thrilling masterpiece for yourself. Even if the terrifying action on the screen doesn’t give you chills, the haunting score most certainly will. Don’t miss this one if you’re a fan of the “legends.”

Harry Potter and the Chamber of Secrets

Even people who didn’t like (or read) the books have seen bits and pieces of the Harry Potter franchise. This event, taking place on August 31st, will be sending you back to Hogwarts for more adventures with Harry Potter and his wizarding crew, as he unlocks the terrifying Chamber of Secrets and learns of new dangers that will soon present themselves.

If you’re not up for traveling out to the cemetery to catch an outdoor movie, you’ve always got the option of hanging around in the cozy confines of residences like Alder. Here, where luxury and comfort come second to none, you’ve got what might be the perfect setup to watch some of your favorite old films — solo, with friends, or with that special someone. Let the mood take you where it may — check out what Alder can offer you, then prepare for a warm welcome to the superlative Los Angeles community.